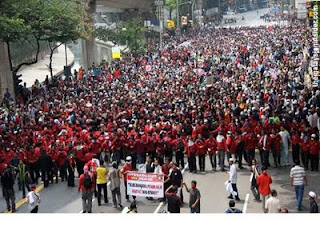 Sometimes it's really heated up my mind to the present government and certain established people. Critics, critics and critics, non-stop until they satisfied. What they got at the end of those criticizes, NOTHING unless a piece of crap. Thank god, blog is here today, thus, we did not have to waste so much papers for our lust to criticize people. 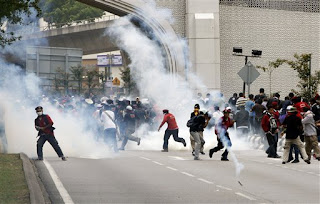 I have read a lot of articles, columnist, and related issues on anti-ISA protest recently. This is definitely serious problem and i think the present government should look over on this matter. Again, i pointed out the same thing previously. Actions are not taken. By blaming others and pointing fingers toward each other, definitely it's not the good act and until now, Malaysia still applied this kind of stupid tradition. I expected more unexpected events will occurred in the future if proper actions are not in the line.

I have read and understand the article posted by Tun Dr Mahathir on "Budaya Anwar". The article posted aims to attack personally on Datuk Seri Anwar Ibrahim (DSAI). This is not a proper way to attack people. You need to analyze the causes of event and why this event happened at the moment. By simply putting the blames on certain person, this is totally consider as NOT professional. Not everything BAD happened in Malaysia is caused by DSAI or Pakatan Rakyat. People don't satisfied enough with the action taken by the law to serve justice and which is why "illegal" demos are the only way to show their protest on the issue. This demo supposedly rally in peacefull BUT due to the "mesra rakyat" police, hesitation occured towards water-cannoned, teargassed and people arrested at the weekend. This is how the ugly scenes created by people who serve justice to the Malaysian Citizen. Unacceptable!!! 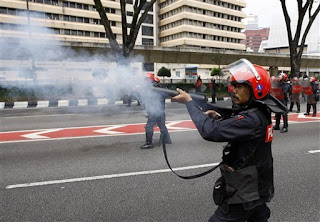 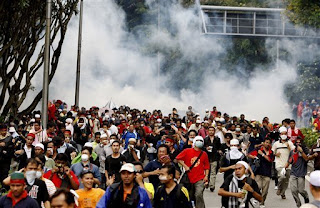 Thinking further about the people surrounded the Anti-ISA protest such as smaller hawkers who have said to be "Kais pagi Makan pagi, kais petang makan petang" should be considered before such demo conducted. Excuse me!!! these people do understand the problems faced by the country and how come they live and sell their food OR building up bussiness in this country if justice is not being serve on the right way. I think their "rezeki" also gone if more corruptions and stupid leaders who lead this country in such ways.

It is understood that those people already seek such approval or permit from the government to conduct such peace demo, how it ended up?? of course, the present government do not allow such thing to be conducted due to internal security of local citizen. That's just lame reason used BUT did you ever think WHY the local citizen CHOOSE to be there and protest on ISA???????????

EASY, because JUSTICE is not served well in the country. HOW??? Just relax and let it devour our life right away like that. UNACCEPTABLE. This is might sound prejudice but please, i hope this should not be misinterpret for certain people. Some people just don't care whether ISA is abolished or not. I don't think they really care enough about their home. Narrow-minded person. If you say, we just abide the law and nothing to be afraid of, but why there are many unsolved criminal cases where certain people used the law to make people suffer?? Is THIS what we called JUSTICE?? Think carefully, Malaysian Citizen. 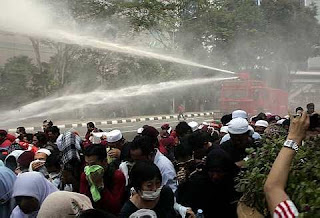 As conclusion, such demos will happened again in the future because people aware that JUSTICE is not served in the right manner and is not just ISA. As Malaysian Citizen, i feel it is time to do peace talk on both sides so that every agreement can be achieve. THIS IS FOR THE FUTURE OF MALAYSIAN as well as the beloved country.

(For Blog readers, i have so much thoughts and ideas to be discuss, you may give your opinions on this issue. I hope we might share some knowledge and experiences here regarding this hot issue)
Posted by aMMerZ at Thursday, August 13, 2009

hey,dude...long time haven't seen u, what happen to u?? always disappear in thin air..hehe

~even i'm said "wake up" to Malaysian, STILL it won't work but like marina mahathir said, sometimes repetition is the only way to get some things to people's head...again...again...until realize it,huhu~